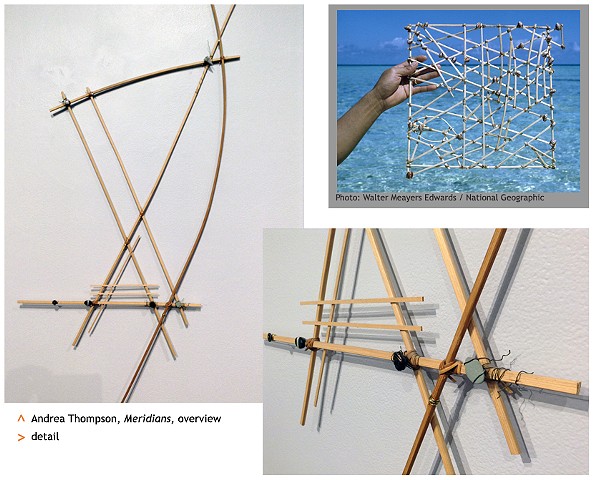 In an era before electronic navigation devices, residents of the Marshall Islands traveled with ease between distant islands in the Pacific Ocean. Without compass, sextant, or any point of reference, these navigators found their way by reading the ocean itself.

The Marshallese created a unique form of map, called stick-charts: made of sticks and seashells, these charts show major ocean wave patterns and the way these waves are disrupted by islands. This is a reverse of Western maps, in which land is the “positive” and the ocean is the “negative,” the empty space in between. For these Island sailors, the shifting surface of the water holds information about islands that, while out of sight, reveal their location by bending the wave forms around them.

Each stick-chart could only be interpreted by the person who originally made it, reflecting that sailor’s personal and subjective experience of the sea.

I created the artwork Meridians over ten yeas ago, in an attempt to map the people, places, and events that were shaping my own path. It was clear that some things exert great influence even when they have become distant in time or place, while other things that may seem directly ahead will actually deflect or hinder one’s forward progress. Looking at this piece now lets me reflect on how much my own landmarks have shifted.

The stick-charts were memorized, and not taken along on the voyage; each journey must be taken anew, with fresh eyes.