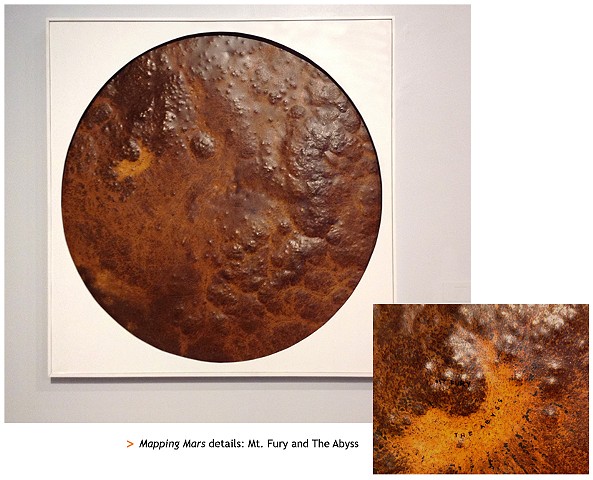 In 1894, American astronomer Percival Lowell established an observatory in Flagstaff, Arizona and devoted his time to a study of the planet Mars. During his years of nightly observations, he became convinced that the barely-discernible dark markings on the surface were actually canals — non-natural constructions that proved the existence of intelligent life.

Lowell drew extensive maps of the martian surface, detailing the canals, oasis, and regions he saw there and speculating about an advanced civilization that had built them. He named the features after gods and monsters of mythology, the kingdoms of ancient Earth civilizations, and realms of the underworld.

We now know that Lowell’s maps are no more than the powerful combination of optical illusion and wishful thinking: he saw these features because he wanted to see them. In this, he is not alone; the red planet has served as a template for human ambitions, fears, and desires throughout history. Although Lowell’s theories were discredited in his own lifetime, the idea of water on Mars continued as a central theme in science fiction for half a century, and the fascination with life on Mars remains an active part of scientific and popular culture today.

This storytelling is an integral part of the way we relate to landscapes. The process of mapping taps into a deep human need to create order by assigning a narrative and emotional meaning to a place. Like Adam in the garden, to name is to conquer.

For this exhibit, the artwork Mapping Mars presents a landscape of naturally rusted steel: random, organic, without history. Onto this surface have been added some of the names Lowell assigned to his maps of Mars, translated from their latinized forms. These labels question how and why we map places and bring meaning — and delusions — to the unknown.