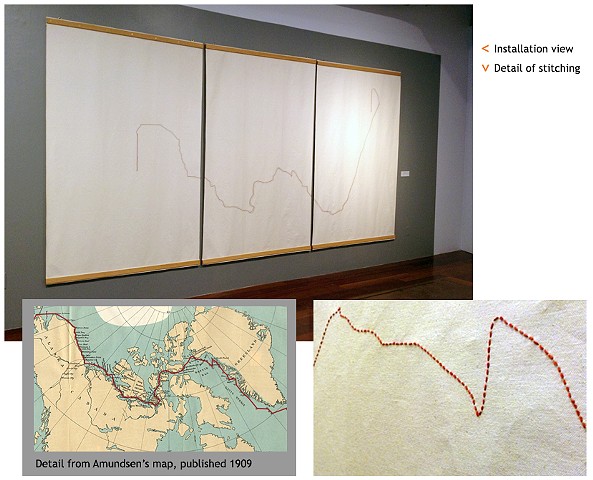 Voyage of the Gjoa

Beginning as early as the 17th century, explorers have searched for a sea route around North America via the Arctic Ocean, called the Northwest Passage. The first to successfully navigate the Passage was Roald Amundsen of Norway, traveling in 1903 to 1906 with a crew of just six in a modified fishing boat called the Gjoa.

Many explorers before Amundsen has searched for the Passage and failed, often with disastrous results. Moving pack ice creates a shifting, hazardous landscape that is neither open ocean nor solid ground, with ice floes that can trap and slowly crush sailing vessels. The proximity to the earth’s magnetic pole means that compass readings no longer show true north, and white-out storms can reduce visibility to zero. In the Arctic, it is a constant challenge simply to know where you are.

Amundsen reasoned that the land’s scant resources could only support a small crew, and his expedition was purposely light and adaptable. They readily adopted survival skills learned from the Inuit, such as ice hut construction and seal-skin clothes, and hunted caribou and seals for food. The shallow-draft boat skirted the ice floes of summer and was purposely allowed to freeze in winter, becoming the crew’s winter quarters.

This willingness to submit to the realities of the landscape, instead of trying to conquer it, represents a peculiar combination of humility and confidence. Amundsen may have been exploring the Arctic but we are all, in our own way, pressing forward into the unknown: of time, change, and twists of fate. The essence of resilience is being at home in this uncertainty, being open to our surroundings, and having faith in our own ability to both improvise and persevere.

The artwork Voyage of the Gjoa depicts the route taken by Amundsen and his crew as a red thread stitched onto a triptych of blank canvas. The path is accurately reproduced from Amundsen’s published map, but without any reference points: for these explorers, each day was another step forward into unknown territory. The wandering red thread reminds us that in the non-Euclidian world of human experience, the best path between two points is rarely a straight line.